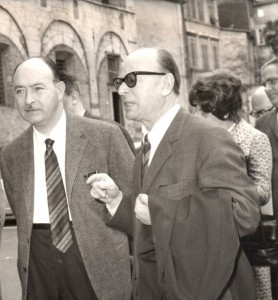 The foundation of the Prato State Archives coincided with the conclusion of the restoration of Palazzo Datini thanks to the work of Nello Bemporad. On the 10th January, 1957 the establishment of a subsection of the State Archives of Florence in Prato was officially decreed. Guido Pampaloni was given the task of reordering all of the papers that then constituted and remain even today, the bulk of the documentary patrimony of the Prato State Archives: the historical Archives of the Municipality of Prato (inventoried by Ruggero Nuti in 1939), the Casa Pia dei Ceppi Archives which comprise the Francesco di Marco Datini Archives, the Ecclesiastical Patrimony Archives (administered by the “Ceppi” foundation comprising of documents concerning convents, monasteries, congregations of Prato), the older part of the Hospital of Misericordia and Dolce Archives, documents regarding a Conservatory dedicated to the instruction of girls (the “Conservatorio delle pericolanti,” then the Charity School in Santa Caterina), the Monte di Pietà and the Confraternity of Misericordia Archives. The solemn inauguration took place the following year, by which time a highly summarized guide, a printed inventory, curated by the same Guido Pampaloni was already published.

The warehouses of the Casa Pia dei Ceppi, known as “the granary” by  historians, where grain had been conserved, bread cooked and distributed to the poor of Prato, was where the most precious memories were collected,  put in order and made available for scholars to access for their research.

The deposits of the State Archives’ subsequent growth followed an already marked path. The Ceppi Foundation Archives have all been archived except for the current portion, the Hospital Archives are now preserved from the 1960′s until today and the city of Prato has filed the papers regarding the dissolved IPAB (Public Institute of Charity and Welfare).

Since the establishment of the Province of Prato (1997) there have been the addition of Acts passed through the State branch offices, such as documents from the Registry Office (births, deaths, marriages and declarations of inheritance), practices of the command of the fire brigades and others. 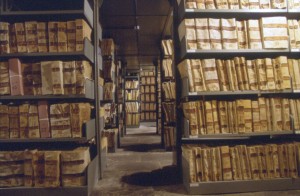 In 2006 the Guido Bisori Archive, (1902 – 1983) Undersecretary to the Interior in the Government of Alcide De Gasperi, who long worked for the creation of the State Archives in Prato and Palazzo Datini, was donated by his heirs.

There are currently steps underway regarding the donation of the Carlo Paoletti Archives, (1930-2007) protagonist of the valorisation of the cultural patrimony of the city.